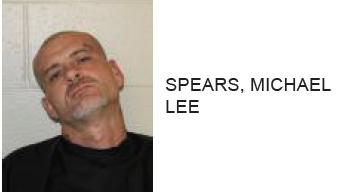 Michael Lee Spears, 41 of Rome, was captured after a chase with police on Floyd Springs Road Wednesday, in which he allegedly traveled over 125 mph on a motorcycle.

Police said that Spears and another motorcycle was traveling on GA 1 at Old Summerville Road when they observed Spears drive away rapidly.  Officers also stated that they saw a blue LED light on his motorcycle.

Reports stated that when the officer attempted to pull Spears over he then attempted to flee, with speeds reaching 128 miles per hour. They added that once Spears turned on Floyd Springs Road he lost control and wrecked.

A passenger on his motorcycle, which was Spears’ son, was injured in the accident.  Police said that Spears then left his son at the wreck and attempted to flee on foot.

After a foot chase he was captured and arrested.

Spears son was treated and released.

Spears is charged with a stop sign violation, two counts of reckless driving, driving on a suspended license, restrictions on the use of blue lights, speeding, obstruction, fleeing or attempting to elude a police officer and parole violation.

Man Wanted for Burglary in Rome Found Barricaded Inside Bathroom