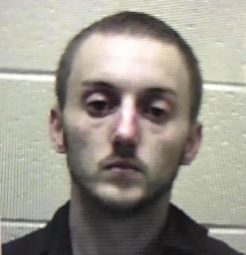 Kevin Dakota Burnum, 25 of Buchanan, was arrested in Polk County after a police chase involving a stolen vehicle from Haralson County.

Reports said that a manhunt began after Burnum crashed the vehicle and ran away on foot near a residential area.  He was finally captured and held at gunpoint by an off-duty Cedartown Police officer at a home on James Daniel Road.

According to authorities, not only did Burnum steal a truck but he also attempted to break into numerous other vehicles near Browning Road. Police Chief Kenny Dodd is recorded to say that he unsuccessfully attempted to steal another vehicle using a handgun and a riffle on Ashley Road.

Burnum is charged with theft by receiving stolen property, two counts of possession of a firearm or knife during the commission of or attempt to commit certain crimes, possession of a sawed-off shotgun, sawed-off rifle, machine gun, dangerous weapon or silencer, second degree burglary, entering automobile or other motor vehicle with intent to commit theft or felony, theft by taking, possession of methamphetamine, and conspiracy to commit a felony.