Floyd County police arrested Neil Adam Pugh, 33 of Rome, this week for allegedly stabbing a man in the back. Report said that Pugh stabbed the male victim in the back numerous times hours after an altercation. 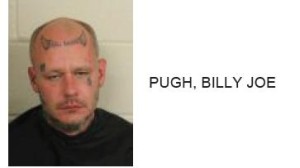 Billy Joe Pugh, 35 of Rome, was arrested after being after an altercation with his brother, Neil Adam Pugh, 33, resulted in the older brothers stabbing.  Reports said that Billy Joe broke into his brother’s home Ole Cave Spring Road home and stole numerous items on Monday.

A fight later broke out and Neil Pugh, as previously reported, stabbed Billy Joe in the back several times.

Billy Pugh is charged with first-degree burglary and probation violation.

Homeless Rome Man Found Drunk and in Possession of Drugs