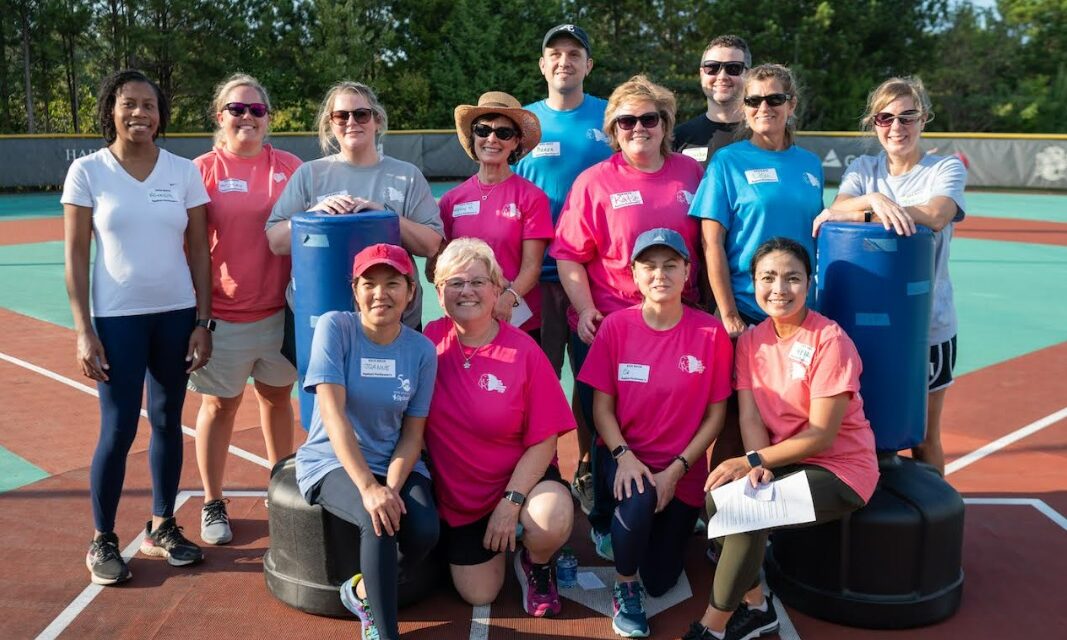 After the ceremonial first pitch by Ward Williamson, whose late father benefitted from the rehabilitation services at AdventHealth Redmond, the umpire and neurologist David Hale, MD, flipped a coin to determine that the Rattlers would go up to kick first while the Chargers would take the field. The Rattlers, coached by physical therapist Connie Shelley, stepped up to home plate with fierce energy on their faces.

Rehabilitation professionals including physical therapists, occupational therapists, physical therapy assistants, occupational therapy assistants, speech language pathologists, and office staff supported each player, providing modifications as needed to allow them to kick then race to first base. In the outfield, the Chargers stood ready for action. The game progressed as kickers made it to the bases, running, walking or riding, all smiling from ear to ear. The crowd roared while the DJ played a power anthem preselected by each player as they approached the plate for their turn to kick.

Chargers player Sammy Tapp from Summerville, Georgia said this was one of the best days he has had in recent years. He worked much of his career as a grocery store manager before retiring in 2019 as his health began to decline. His doctor recommended he consider physical therapy to cope with his Parkinson’s. He joined the AdventHealth Sports Med and Rehab Parkinson’s therapy group in early 2022 and was astounded at his rapid progress as he learned new strategies for accomplishing daily tasks such as fall recovery and stretches to address his tightening muscles.

“When working with Marge, she really does make you feel like you can do anything. I’d get a little depressed thinking about the things I used to be able to do, but she just built me up and made me believe that I can get through anything,” said Tapp.

“I am fortunate to have a great team of specially trained therapists that allows us to have such a comprehensive program. Together we are able to provide both one on one therapy and community group classes,” said Kinder.

The program is based on the most current research regarding Parkinson’s and motor learning and focuses on deficits specific to Parkinson’s and addresses the issues that people with Parkinson’s face on a daily basis. The group classes provide a wonderful dynamic and opportunity to focus on function in a fun and energetic way while building community.

“The number one cause of deterioration for Parkinson’s patients is social isolation. So, I say, let’s get out and let’s get going. When you think about it, this kickball game demonstrates how capable they are. Look at what they are doing; they have the capacity to do more than they think they can, and this game proves it,” said Kinder.

In the end the Chargers, coached by physical therapist assistant Teresa Weaver prevailed by a score of 24 to Rattlers 17, the players and their families packed up, exhausted but happy, and went home with a renewed sense of motivation to train for next year’s game.

With two locations in Rome and Cedartown, AdventHealth Sports Med and Rehab services provide a caring environment for recovery close to home. The team of compassionate and experienced therapists is ready to help patients regain their independence as quickly and safely as possible and offers the following services:

In the Mind of Tony Potts – Spring Baseball