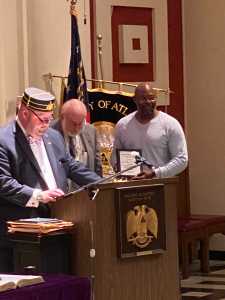 The “Arthur Kaplan Public Safety Award” honors outstanding first responders, and is named after Judge Arthur Kaplan, an Atlanta judge widely known for his support for police officers. Elbert is a 12 year veteran of the Sheriff’s Office, currently assigned as a sergeant in the School Resource Officer (SRO) unit.

In the nomination for the award, Sheriff Mitch Ralston described Elbert as “an exemplary school resource officer, beloved by students, school staff, and parents alike….(Elbert) is an inspiration and a valuable resource to both the the school and his colleagues.” . Before joining the Sheriff’s Office, Sergeant Shelly was a professional football player, having spent 10 seasons with the Atlanta Falcons and was “all pro” 4 years. Elbert resides here in Gordon County, is active in coaching football, and enjoys fishing on his days off.

Georgia Power Employees to Volunteer at Habitat for Humanity