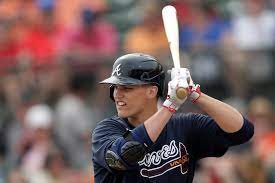 The Rome Braves, High-A affiliate of the Atlanta Braves, have announced two roster moves ahead of tonight’s matchup with the Greensboro Grasshoppers.
The Atlanta Braves traded first baseman Bryce Ball to the Chicago Cubs last night in exchange for outfielder Joc Pederson. Ball, the no. 12 prospect in Atlanta’s farm system, spent much of 2019 and all of 2021 in High-A Rome. The Mason City, Iowa, native exited last night’s game in the top of the fifth inning after Rome’s coaching staff was notified of the trade. Ball played in 54 games for the R-Braves this season, batting .206 with 6 home runs and 31 runs batted in.
In a corresponding move, Rome has reinstated infielder Garrett Saunders to the Active Roster after a brief stint on the Developmental List. The Central College (Iowa) product has hit .159 in limited plate appearances this season.
Saunders will wear the number he wore earlier in the season, no. 30, for the Rome Braves. The Rome roster now has 30 active players, 4 injured, and 1 inactive.

In the Mind of Tony Potts – A Legend Walks