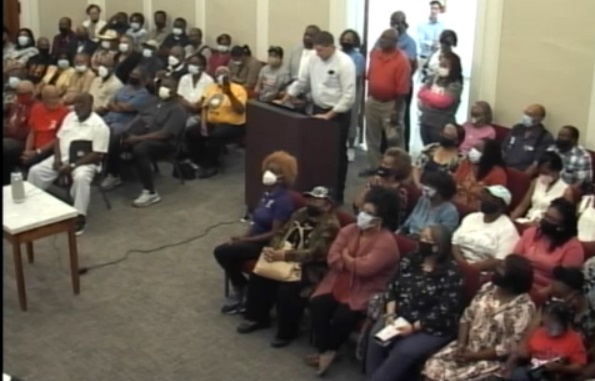 After months of speaking on the need of new housing in Rome and Floyd County, City Commissioner Wendy Davis voted against a 36 unit apartment complex at the intersection of Martin Luther King Blvd and Gibbons Street in North Rome Monday.

The Rome City Commission voted 4-3 in favor before Wendy Davis, Chair of the Rome Redevelopment Committee, cast her vote to stop the development despite her repeated plea for new housing in the area.  Davis also chairs the city’s Special Committee on Housing

The vote was 4-4 due to Mayor Craig McDaniel abstaining because he works in the same real estate office as the applicant for the development , Patrick Cash.

Rev. Bernard Young of Thankful Baptist Church expressed his displeasure for the new housing, stating, “This is how gentrification starts.”  In such, Young wanted to stop “wealthier people moving in, improved housing, and new businesses” in the area

Residents spoke against the rezoning stating that Five Points is a historical area and putting a three-story building shouldn’t be done, arguing that it would mess up the flow of traffic.

Commissioners Mark Cochran told residents that under its current zoning that a developer could come in and use the property for such things as a hotel, a motel, a liquor store, a fast-food restaurant, a gas station, a brewery, or a solar panel array without any zoning change.