Elizabeth Anna Hendrix, 25 of Rome, was arrested this week after police said they found her in possession of methamphetamine and marijuana after causing a wreck at the intersection of Old School and Old Summerville Road.

A search of her car led police to locate a glass pipe and marijuana.

While serving a search warrant at her home three days later she was found in possession of a glass pipe containing meth residue. 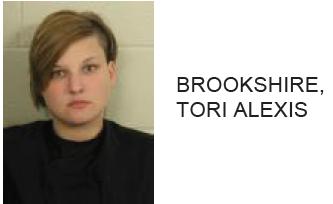