The last of six defendants who operated a clandestine methamphetamine laboratory in north Fulton County has pleaded guilty to conspiracy to possess methamphetamine with intent to distribute, concluding a months-long investigation that led to the seizure of more than a quarter-ton of methamphetamine from several residences in the Atlanta suburbs.

“Mexican cartels push methamphetamine and other drugs in our district without any regard for the lives that they ruin along the way,” said U.S. Attorney Byung J. “BJay” Pak.  “In close coordination with our federal, state, and local partners, we are committed to stopping the flow of drugs across the border, and their distribution in our community.  The discovery and dismantling of a methamphetamine lab of this magnitude is a great win in that battle.”

Robert J. Murphy, Special Agent in Charge of the DEA Atlanta Division stated, “Drug Trafficking knows no boundaries and is driven by greed and power. These guilty pleas should serve as a reminder to drug traffickers that DEA and its law enforcement partners will expend the necessary resources to dismantle, disrupt and destroy those who distribute poison throughout our communities. Many thanks to the collaboration of law enforcement agencies and the U.S. Attorney’s Office who made this investigation a success.”

According to U.S. Attorney Pak, the indictment, and other information presented in court: a Mexico-based drug-trafficking and money-laundering organization led locally by Fredrico Pacheco-Romero and Carlos Martinez utilized homes in Milton and Ellenwood, Georgia to convert large quantities of liquid methamphetamine into crystal methamphetamine. Agents learned in early February 2019 that a shipment of liquid methamphetamine was destined for the Atlanta area.

Each of the six defendants pleaded guilty to participating in a drug-trafficking conspiracy.  The defendants will appear before U.S. District Judge Leigh Martin May for sentencing as follows:

The U.S. Attorney’s Office in Atlanta recommends parents and children learn about the dangers of drugs at the following web site: www.justthinktwice.gov. 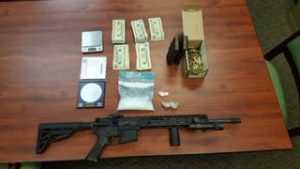 Teen Driver’s in Georgia to get License without Road TEst