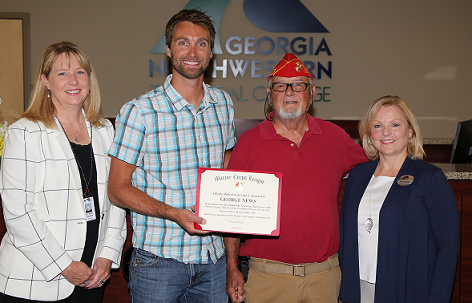 Two Georgia Northwestern Technical College (GNTC) students were recently chosen by the Jake Puryear Detachment 1020, Rome Marine Corps League to receive grants of $1,000 each based on letters submitted by the students to the league.

The league awarded Calhoun resident George News the Bobby Blair grant. News is pursuing an Air Conditioning Technology degree while maintaining a 4.0 GPA.  His grandfather is the late Jack News who served with the Marines in the Second Division during World War II.

Pamela Tallent of Ringgold received the Marine Corp League Detachment grant. Tallent serves her community in Walker County through various charity programs and is in the Social Work Assistant program at GNTC with a 4.0 GPA as well.

The Bobby Blair grant was established by a donation from Marine and League member, Bobby Blair, who passed away shortly after his donation. Blair was a long time resident of Rome and owned an appliance repair business. The Rome Marine Corps League officers and Scholarship Foundation Trustee members decided to establish a technical college grant with the donation since Blair spent his life in the technical field.

Georgia Northwestern Technical College (GNTC) provides quality workforce education to the citizens of Northwest Georgia. Students have the opportunity to earn an associate degree, diploma, or a certificate in business, health, industrial, or public service career paths. This past year, 12,785 people benefited from GNTC’s credit and noncredit programs. With an annual credit enrollment of 7,499 students, GNTC is the largest college in Northwest Georgia. GNTC has an additional enrollment of 5,286 people through adult education, continuing education, business and industry training, and Georgia Quick Start.  For more information about GNTC, visit us at www.GNTC.edu. GNTC is a unit of the Technical College System of Georgia and an Equal Opportunity Institution. 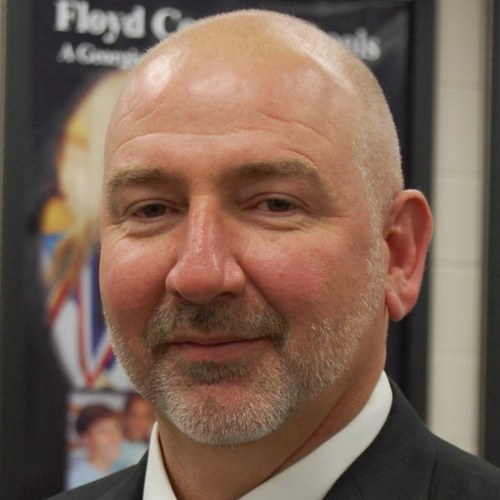