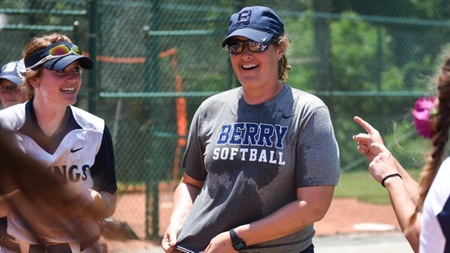 “We are so thankful for all that coach Thiermann has done to build a nationally competitive program,” Mason said. “Even more so for her investment in our Viking athletes. She will be missed and we wish her the best of luck in her future endeavors.”

Thiermann became the first Berry softball coach in June of 2008. Under her guidance, the Vikings developed into one of the top softball programs in the nation.

“I am grateful for all of the relationships built over the years,” Thiermann said. “There have been many people that have helped me grow professionally and personally, and that is what makes leaving so difficult. I am forever indebted to my colleagues, student-athletes, parents, alumnae and Berry for providing me such a meaningful experience. I will always bleed Berry blue and can’t wait to see what is next for Berry softball.”

Berry has also earned a No. 1 National Fastpitch Coaches Association (NFCA) national ranking, had three NFCA All-Americans, four CoSIDA Academic All-Americans, 54 All-Conference Selections, 89 SAA Academic Honor Roll honorees, nine SAA Major Award winners (Player, Pitcher or Newcomer of the Year) and Thiermann has been named the SAA’s Coach of the Year five of the past six seasons. The Vikings also set the program record in 2017 with 40 wins and were a perfect 17-0 in SAA play. In addition, Berry earned NFCA All-Academic Team honors each season since 2011 and placed numerous athletes on the NFCA Scholar-Athlete list.

Thiermann holds a bachelor’s degree in both business administration and public administration from the University of Wisconsin – Green Bay, where she played NCAA Division I softball for the Phoenix from 2001-05 and was a four-year Horizon League Honor Roll member.