The Atlanta Braves have announced a series of roster moves affecting the Single-A club to start the second half of the season today. The Braves first two draft picks for 2019, catcher Shea Langeliers and infielder Braden Shewmake have been activated on the Rome roster.
Rome catcher Logan Brown has been promoted to High-A Florida along with outfielder Andrew Moritz and infielder Derian Cruz. In other corresponding moves, outfielder Justin Dean and catcher Ricardo Rodriguez have been activated off the injured list while catcher Hagen Owenby has been placed on the injured list. LHP Victor Cavalieri has also been transferred to Rome from the GCL Braves.
Langeliers, 21, was the ninth overall selection and the Braves first pick in the 2019 First-Year Player Draft out of Baylor University. In his junior season with the Bears, Langeliers batted .308 with 20 extra-base hits, 33 runs scored and 42 driven in over 44 games. The Keller, Texas, native was one of 14 semifinalists for the 2019 Buster Posey National Collegiate Catcher of the Year award and was named 2018 Rawlings/ABCA Gold Glove Winner among catchers. The catcher combined to hit .289 (180-for622) over the course of 157 games at Baylor.
Shewmake, 21, was the 21st overall pick and the Braves second selection in the 2019 First-Year Player Draft out of Texas A&M University. The shortstop posted a .313 batting average (78-for-249) with 14 doubles, four triples, six homers and 47 RBI in 63 games for the Aggies this season. A two-time All-SEC First Team selection, Shewmake also stole nine bases and was named to the midseason watch list for the Golden Spikes Award. The Wylie, Texas, native missed only one game in his three-year career at Texas A&M where he hit a combined .323 with 72 extra-base hits and 161 RBI.
Brown, 22, is hitting .301 with 11 doubles, a triple, one home run and 26 RBI in 51 games for the Single-A Braves this season. He was also named to the South Atlantic League Mid-Season All-Star team. In 14 games during the month of April, Brown posted a .327 average with one homer and seven RBI. The Indiana native was selected by the Braves in the 35th round of the 2018 draft out of the University of Southern Indiana.
Dean was hitting .286 with 12 doubles, four triples and three home runs on the season for Single-A Rome before hitting the Injured List on May 25. He’d driven in 20 runs while swiping 13 bases on the season. At the time, his triples ranked tied for second-most in the South Atlantic League. He still ranks among league leaders in OBP and OPS. Dean was selected by the Braves in the 17th round of the 2018 draft out of Lenoir-Rhyne University.
The Rome roster has 25 active players and 5 injured.
SUMMARY
ADD: Shea Langeliers
ADD: Braden Shewmake
ADD: Victor Cavalieri
DELETE: Logan Brown
DELETE: Andrew Moritz
DELETE: Derian Cruz
ACTIVATE: Justin Dean
ACTIVATE: Ricardo Rodriguez
INJURED: Hagen Owenby

In the Mind of Tony Potts – Championship Droughts 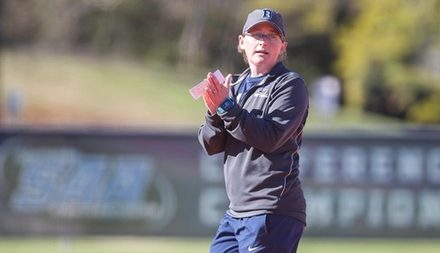