The NFL Draft played out over the weekend in Nashville. It appeared that the location was a huge success for the league. There were some interesting picks and great moments as is usually the case. The New York Giants drafting Duke quarterback Daniel Jones with the sixth overall pick in the draft was baffling at best.

Kentucky Wildcat linebacker and pass rusher Josh Allen was available at six. The Giants had three first round picks and likely could have gotten Jones with either of the later picks. Giant fans are, shall we say, less than thrilled with the choice. There has even been the suggestion that the Giants’
pick was somehow racially influenced, which is ludicrous. I have no doubt they made the pick they felt gave them the best chance to win although I would have loved to have heard the logic. However, the best moment of the draft had to be when gigantic Christian Wilkens surprised NFL Commissioner Roger Goodell with a chest bump that I guarantee you hurt the next day. Goodell did not know what to do when the huge Clemson lineman was coming at him.

The local team, the Atlanta Falcons, had what I would consider a mediocre draft at best. Let me preface it by saying that I fully understood going in that the Falcons drastically needed to shore up the offensive line during the off season so picking O-Line with their first two picks is not horrendous. However, guards do not normally fly off the shelf during the first round. Taking a guard with the 14 th overall pick with so much elite defensive talent available is questionable. Chris Lindstrom out of Boston College should be a decent addition to a beleaguered line but he was a big reach at fourteen.

The Falcons then traded away significant picks to move up to take offensive tackle Kaleb McGary. Again, McGary has the potential to end up starting at right tackle for the Falcons, but I am not sure they needed to give away draft picks to get him. Even if he was not still there when the Falcons picked early in the second round, at the time the Falcons moved up there were still ther solid tackle prospects available such as Jawaan Taylor and Dalton Risner. This trade left the Falcons with no picks on the second day of the draft.

On the third day, Atlanta traded away more draft picks to move up six spots and take Ohio State cornerback Kendell Sheffield. I don’t know if Sheffield would have still been available six picks later, but this is not the first Buckeye defensive back the Falcons have taken and if he turns out to be a good pick, he will be the first. Of course, to quote Wall Street, past performance is not necessarily indicative of future results, so Sheffield might work out great. Still, it cost the Falcons more draft picks.

Also, in the fourth round, Atlanta traded away their seventh-round pick to move up two spots and take John Cominsky out of Division II Charleston. Seriously? They honestly believed that they MUST move up two spots to get that defensive end with three sacks last year against much lesser talent? At this point, I can’t help but wonder if the Falcons were just saying, “We aren’t really very good at this, please don’t make us use all of these picks”.

I know teams do not and cannot pick players based on college team or conference. However, the SEC set an all-time record with 64 players taken in the draft. It amazes me that a franchise located in the center of the best conference in all of college football did not see fit to take ANY player from the SEC. That is especially baffling since some of the best talent on the current Falcon roster came from the conference.

Why turn away from what has been working? Furthermore, while fans will be happy and come to the games as long as you are winning, the Falcons have a fan base that are also huge college football fans and the majority of those fans have never even heard of almost all of the players drafted by Atlanta this year. Some fan familiarity wouldn’t be a bad thing. Georgia fans keep wondering how it is that with all of UGA’s great recruiting every year the Falcons never seem to pick any Georgia players. Hopefully, the
staff in Atlanta knew what they were doing and choose the best available players that fit their needs.

The bottom line is this. In the long run, this Atlanta draft may work out just fine. The biggest goal going into the draft for the Falcons had to be shoring up a porous offensive line. Atlanta has a plethora of skill players and probably the best quarterback in the franchise’s history in Matt Ryan. They need to protect and utilize all that talent and perhaps that was accomplished. If Atlanta did indeed find two solid starters for the O-line on day one of the draft, you would have to grade their draft at no worse than a B-. For the fans however, not many came away from this draft booming with excitement and anticipation.

Sometimes those are the best drafts when viewed from five years down the road. 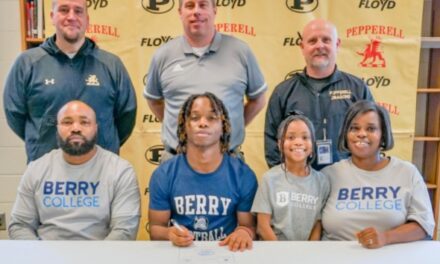