Woman Arrested While Running Down The Road High On Meth 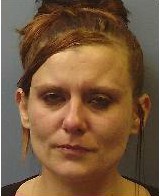 A Lafayette woman was arrested Monday night after someone reported that she was walking down the road looking like she was in distress.

Around 8:30 PM, a county deputy responded to a tip that a female was running down the road like she was in distress on Old Highway 27 near New Bethel Church Road. A deputy’s report says that she was using her phone’s flashlight in the dusk.
When the deputy stopped to see if she way okay, the woman, identified as 27-year-old Lafayette woman Amanda Schrimpsher, said she was just looking for her food stamp card on the ground. However, she was reportedly talking almost too fast to be understood.
According to the deputy’s report, Schrimpsher was moving erratically and had was sweating so much that the deputy thought she had just gotten out of the shower. When asked, she said she was on probation and that she didn’t have anything illegal on her.
However, Schrimpsher reportedly kept playing with a cigarette case in her hand. When the deputy asked if he could search the case, Schrimpsher quickly began to try to take something out of it, and the deputy told her to stop. She suddenly started apologizing and said she was “about to go to rehab”.
The deputy handcuffed Schrimpsher, and found a loaded methamphetamine needle in the cigarette case. “I placed Ms. Schrimpsher in hand cuffs until I could find out what was in the black case, because she was starting to walk away and move around before I had the black case in my hand”, reads the report.
Schrimpsher was also un-handcuffed so she could retrieve methamphetamine she had hidden in her bra inside a case for eye contacts. Schrimpsher was arrested and booked into the county jail, where all of the items tested positively meth.