“No, I mean it this time Charlie Brown. Really, this time I will hold the football until you kick it.” And then Charlie Brown, otherwise known as Atlanta fans, fall for it one more time. They buy the shirts, the flags, the cups and the plates and they go all in ONE MORE TIME. I mean, how bad can this go, right? Even if they lose, they made it to the Super Bowl and nobody can take that away. Right? WRONG!
This time the Atlanta sports team found a way to take heartbreak to an entirely new level. A level never before even imagined. If you buy into the concept that the Super Bowl is the greatest sports event of every year, then what you witnessed Sunday night was the most monumental choke in the history of sports. That’s right folks, I went there. Forget whether Tom Brady is the best quarterback ever. Or whether Bill Belichick is the greatest coach ever. The Atlanta Falcons somehow managed to turn the best season in the franchise’s history and a huge lead in the Super Bowl into the biggest embarrassment in the entire history of sports.
The New England Patriots were favored in the game so losing the game is not, by itself, anything to be ashamed about. But leading the Super Bowl by 25 points in the second half and finding a way to lose is nothing short of a colossal collapse. I have often written of what I call the Georgia Curse. Nobody knows how the curse began. Nobody knows who cast such a wicked curse. But it exists. While the overall futility of Atlanta professional sports is evidence of the curse, there are moments when the curse takes center stage and bows in the spotlight. In 1996 the Atlanta Braves led the New York Yankees by a score of 6-0 in a game that would have given the Braves a seemingly insurmountable 3-1 lead in the World Series and a clear path to repeat as World Champions. Instead, with a 2-2 count on Jim Leyritz, reliever Mark Wohlers chose to ignore the fact that Leyritz was horribly tardy on two blazing fastballs and threw him a slider that was promptly smashed for a three-run homer that tied the game. The Yankees went on to win the game and the World Series and the Atlanta Braves were left with one World Series win in fourteen consecutive playoff appearances. That one win, by the way, is the ONLY championship in Atlanta professional sports history. That was the defining moment of the city of Atlanta’s sports ineptitude until Sunday night.
The Atlanta Falcons took a 28-3 lead with 8:31 left in the third quarter of the Super Bowl. That should mean a World Championship for any other team. The largest deficit overcome in a Super Bowl before now had been ten points. Then the Patriots scored a touchdown with 2:06 in the third and Falcons fans moved to the edge of their seat. When New England kicker Stephen Gostkowski missed the extra point, Atlanta fans exhaled and began breathing again. Still leading 28-9 going into the fourth quarter things appeared under control. But, the Falcon defense was tired and the Falcon offense was sputtering. Gostkowski kicked his second field goal of the game cutting the lead to 28-12 with 9:44 left in the game. Things were still in hand. But then Brady hit Danny Amendola for a six-yard touchdown and the Pats made a two-point conversion. 28-20 with just under six minutes left. Some Atlanta fans were getting nervous. I, on the other hand, already knew what was about to transpire. Fellow viewers were upset with me for pointing it out. But, I had seen this movie before. I knew how it ended.
The Falcons had the opportunity to put the game away and claim their trophy. After moving the ball just inside the range of one of the best kickers in the NFL, Matt Bryant, the game was there for the taking. Just run the ball a few times forcing New England to use up their timeouts and then kick the field goal to make it a two-score game and out of reach. No, that is what teams like the Patriots would do. Atlanta opted to go to the passing game. A holding penalty and a sack later the Falcons found themselves punting the ball back to the best quarterback in the history of the league and the rest is history.
The sensible sports fan in me points out that the Falcons are a young football team, especially on defense, and could easily be right back in the Super Bowl next year. The experienced Atlanta fan in me says “don’t fool yourself” it is what it is. The Georgia Curse remains. 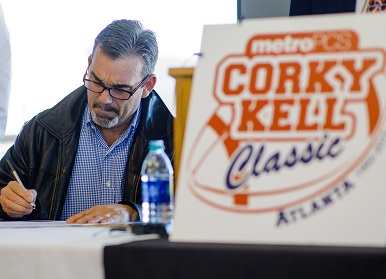