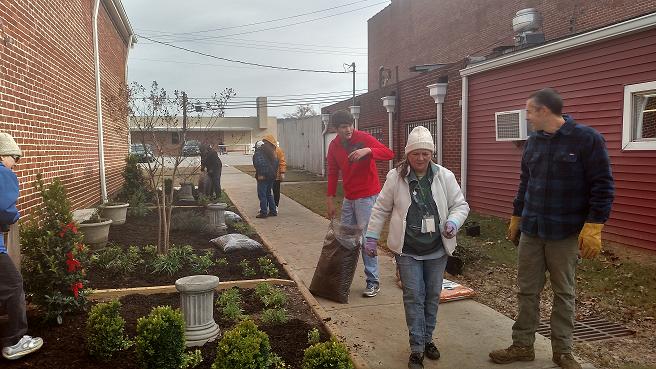 Come take a look at downtown’s newest garden!  The Downtown Development Authority (DDA), along with generous help from Keep Bartow Beautiful and the Bartow Master Gardeners, has just installed a pocket garden in the alley between Ross’ Diner and Lil’ Dollz ‘N Gentz.

This garden was originally installed behind the Legion Theatre as part of an educational project conceived of by Leadership Bartow.  Its plants are all chosen from botanical references made throughout Shakespeare’s writing and then further selected for their adaptability to our local climate.  However, as the Pumphouse Players looked at their their upcoming 42nd season it became increasingly clear that they need that valuable space on their lot for set construction and parking.  Out of that need a collaboration was born whereby the Pumphouse Players donated the plants and hardscape materials to the DDA, which in turn found a new home for them.

A strip of grass-flanked sidewalk by Ross’ Diner offered a likely location for a new garden and after a few meetings the DDA was given permission to use the space.  Sheri Henshaw, Director of Keep Bartow Beautiful, provided invaluable help for this project, which included using her experience in landscape architecture to design a new layout for the long and narrow space.  She also helped to coordinate planting dates and volunteers to bring this project to fruition.

The project stalled somewhat during the drought stricken fall months, when it was too risky to move the plants, but after some much needed rain it was determined that the plants might now be recovered enough to transfer.  All of the hardscape had been moved during a previous volunteer day so this past Friday a team of volunteers from the DDA, Keep Bartow Beautiful, and the Bartow Master Gardeners Association assembled to bring over the plants.

Currently featuring roses, English boxwood, rosemary, thyme, mint, violets, holly, and a dwarf crepe myrtle, passers-by can also expect to see daylilies, daffodils, daisies, and lavender coming up as warmer weather eventually approaches.  The plan is to see how the existing plants adjust to their new home and then to supplement with additional plantings as needed.  Finishing touches such as educational signage, pea gravel, and lights will be added in coming weeks as well.

A lot of factors had to come together to make this project a reality and, in true Cartersville fashion, the community came together to make it happen.  The DDA would like to thank the Pumphouse Players who patiently waited on their own projects in order protect the garden during the drought; the Chamber of Commerce, which supported moving the garden to a new location; Lil’ Dollz ‘N Gentz and Ross’ Diner which gave their support to the project; Taylor Farm Supply, which provided materials for the garden; Modern Woodmen of America, which helped provide funding for the garden; and some anonymous partners without whom this project could have never occurred.

Georgia Power to Reduce Residential Bills by Approximately $5 per month