Update on Wildfires in Floyd and Polk Counties

Both Floyd and Polk County firefighters worked overnight to extinguish numerous grass fires along U.S. 27, as well as homes on Cave Spring Street near the area.  Fires ranged from Walker Mountain to the Polk County line.

Reports stated that one Floyd County Firefighter had to be taken to a local hospital for treatment after overheating. He was treated and released on Tuesday 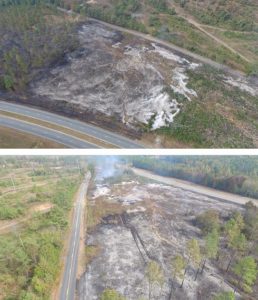 Reports stated that officers are working to find a suspect who may have set the fires on purpose. They described the suspect as a white male in his 40’s with a ruddy complexion, long hair and a beard.  He was suspected to have been driving a small faded red pickup truck.   Police made several stops on Tuesday to individuals who matched the suspect, but no arrest were made.  Floyd County Sheriff officials also were dispatched to Polk County to pick up a suspect that they had originally thought to be the suspect.  However, that person was not involved in the case.

Several homes in the area were evacuated, but it appeared that only two suffered damage.  Authorities said that a storage building and a shed containing farm equipment and antique cars were destroyed.

Officials with the Georgia Forestry Commission said that it appeared that between five and seven fires were started. 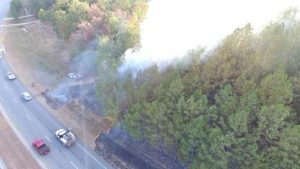 As of early Wednesday morning fire official said that it appeared that all of the fires have been contained and that over 95 percent have been extinguished.