According to Cherokee County Sheriff Jeff Shaver, on Thursday, April 28, 2016, deputies recovered a truck, which had been reported stolen two days earlier during a robbery and assault in Whitfield County, Georgia.  Acting on information from Georgia detectives, Chief Investigator Josh Summerford and Deputy Jeremy Stepps located the stolen vehicle near Pruett’s Fish Camp.

According to Georgia law enforcement, the female victim stated a man and woman arranged to meet at her home to purchase a truck advertised for sale on Craigslist.   They arrived in a dark-colored passenger car, and the woman stayed inside the car, while the man came into the house to speak with the victim about the truck.  When the victim started walking the man out the door to look at the truck, the suspect pulled a knife, and cut and stabbed her.  The suspect then grabbed the keys, ran out of the house, and sped off in the truck, followed by the woman in the car.

The suspect, identified as David Wayne Williams, 47, of Walton County, Georgia, was arrested the following day in Rome, Georgia, after leading police on a chase.  Also taken into custody were two siblings of the suspect, who are accused of assisting him in the crimes.  Williams was turned over to the Whitfield County Sheriff’s Office on warrants for aggravated battery and armed robbery.

According to Sheriff Shaver, the only connection to Cherokee County is that a resident purchased the truck from the stabbing suspect in Georgia on Wednesday, April 28.  Shaver cautions citizens to practice good judgement when attempting to sell or buy an item online and suggests arranging to meet strangers at a public place, such as the Sheriff’s Office or a police department.

Numerous agencies in Floyd County were finally able to capture a suspect that was wanted in a Whitfield County stabbing. Reports said that the suspect, David Williams, 47 of Walton County, allegedly stabbed a woman during a Craigslist transaction earlier this week.  Reports said that his cellphone was pinged to a location in Rome.  When officers approached a man matching Williams description he fled near Alto Park Elementary School around 3 pm Wednesday. 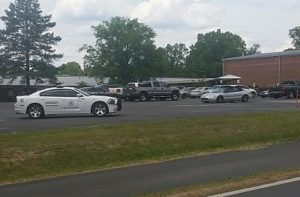 According to sources, Williams went to meet a woman who was selling a car on Craigslist and when they met up he stabbed her numerous times.

Alto Park Elementary school was placed on lockdown as a precaution after the suspect was spotted running towards the school’s gymnasium.

Reports said that Mayra Espitia was assaulted by Williams back on April 26.
On Wednesday, several agents from the Marshal Service went to search the residence of Donna Warren (a known associate of Williams) on Baker Drive in Rome when they observed a vehicle fitting the description of a vehicle known to be driven by Warren pull into a driveway close by and saw a male subject jump out and start running.

A female in the car was identified as Donna Warren. The car the two subjects were in is believed to be the car that brought Williams to the Espitia residence.  During a search, evidence was located indicating Donna Warren was the female that transported Williams to the residence on Serena way. Donna Warren was arrested and charged with two counts of Conspiracy to Commit a Felony (Armed Robbery and Aggravated Battery).

Detectives also found that the brother of Donna Williams (Jerry Wade Warren), also played a part in the incident. Jerry Wade Warren, age 48, of 11 Baker Drive, was taken into custody and also charged with 2-counts of Conspiracy to Commit a felony.

All three suspects have been transported back to Dalton and are being held in the Whitfield County Jail without bond.

The stolen GMC Sonoma has yet to be found.  However; another vehicle Williams had sold to a Rome resident that had been reported stolen out of Walton County, Georgia.