And then there was one. Only one SEC team remains undefeated. That would be the LSU Tigers. You’ve got to love the Mad Hatter, Les Miles. His fake field goal call secured the win over Florida to keep LSU undefeated and right in middle of the playoff hunt.

After Saturday’s games there are now only four SEC teams with ANY hope of making the playoff. Despite many “expert” prediction that the SEC will be left out of the four team group the truth is that if either LSU, Alabama, Texas A&M or Florida win the rest of their games they would almost certainly make the playoff. In my opinion, the winner of the LSU-Alabama game will likely make the playoff.

Georgia and Florida both have a bye week this week allowing both two weeks to prepare for the The World’s Largest Outdoor Cocktail Party. I will extremely surprised if the Bulldogs do not use that opportunity to get Brice Ramsey ready to start the game against the Gators. Greyson Lambert is struggling horribly and I cannot imagine that Mark Richt wants to see him face that Florida secondary. While at face value it would seem like Florida should win this game handily, we all know how this game plays out every year.

As for Florida, Georgia fans were thrilled to hear that starting quarterback Will Grier was suspended forcing the Gators to go with backup Treon Harris. Then Harris went 17-32 for 271 yards, 2 touchdowns and no interceptions against a very good LSU defense. As I suspected, Treon’s struggles last year had more to do with Will Muschamp’s ineptitude than with Treon’s ability.

There are not a lot of marquis games this week. Ole Miss’s loss to Memphis has taken the gloss off of a matchup with Texas A&M. The Tennessee-Alabama could be interesting. It could also be a Bama blowout. Earlier in the year, I was really looking forward to the Georgia Tech-FSU matchup but the Yellow Jackets have crashed and burned since then.

My son believes that Rutgers will surprise Ohio State. Now, that would be worth watching. I’m not sure I buy into the prediction but he has me wanting to keep an eye on that game.

In baseball I, like most of America, am pulling for the Cubs. But, down 3 games to none to the Mets, it will take a miracle at this point. The Chicago goat curse appears to be alive and well.

In the Mind of Tony Potts – Thankful Thanksgiving 2021 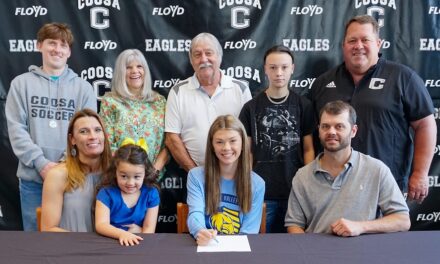 Coosa High Athletes to Continue Playing Careers at Next Level